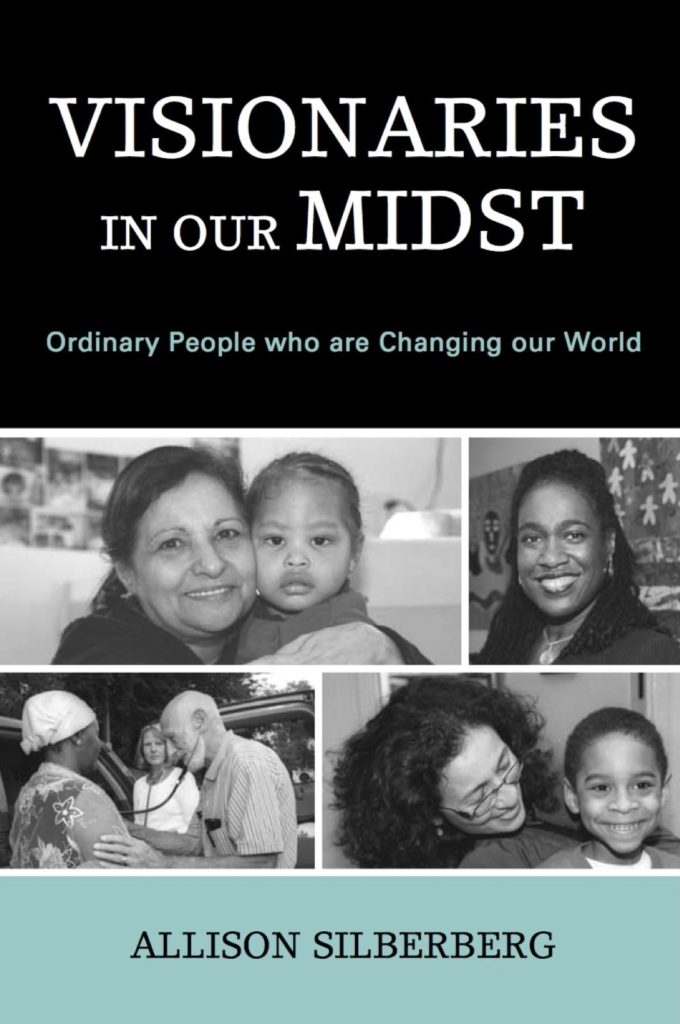 Visionaries In Our Midst profiles ordinary people who are changing our world. These unsung public heroes saw a need in their communities and responded with courage and conviction.

This is a time to believe in what is possible, a time for social innovation and civic engagement. 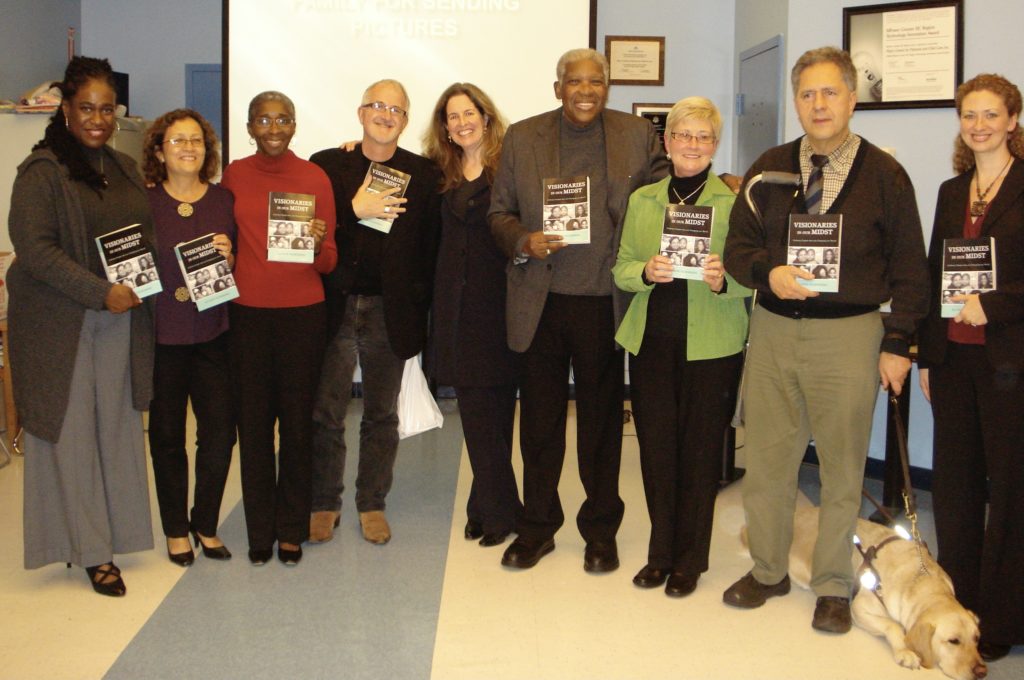 While attending a celebration to honor visionaries in her book, Allison Silberberg (middle) stood with some of those profiled in Visionaries In Our Midst. The festive gathering took place at the headquarters of Mary’s Center in D.C. in late 2009. Left to right:  Mary Brown, Maria Gomez, Dr. Shireen Lewis, Robert Egger, Allison Silberberg, Tom Lewis, Susan Ungerer, Dr. Cris Covelli and his dog Ruby, and Layli Miller-Muro. (Photograph by Lyda Vanegas)

Strong Praise for Visionaries In Our Midst

This is a book of wonders—and hope. It tells us of extraordinary things "ordinary" people can do.

This book will not just help save America; it will help save the world.

Visionaries In Our Midst by Allison Silberberg is a great book about very wonderful people who gave their heart and soul for others. It will inspire many others to do the same if they care. And who doesn't?

In this age of cynicism, here is a book about good people doing good things. What a refreshing change! What a delightful and uplifting read!

Strong stories of unsung heroes who ought to help give the rest of us courage to act. 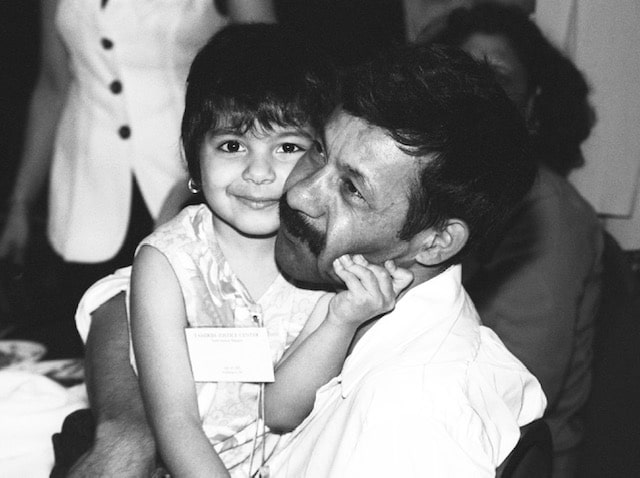 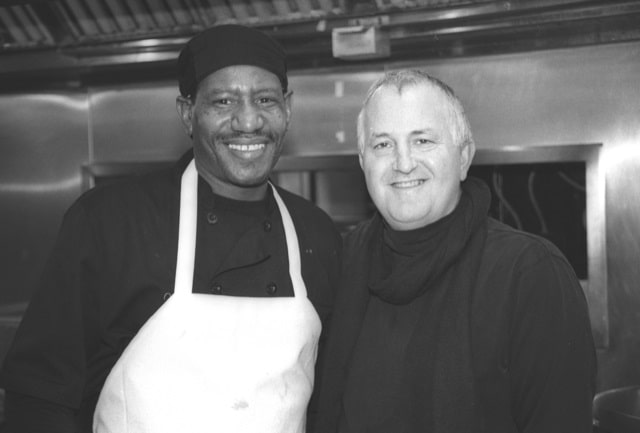 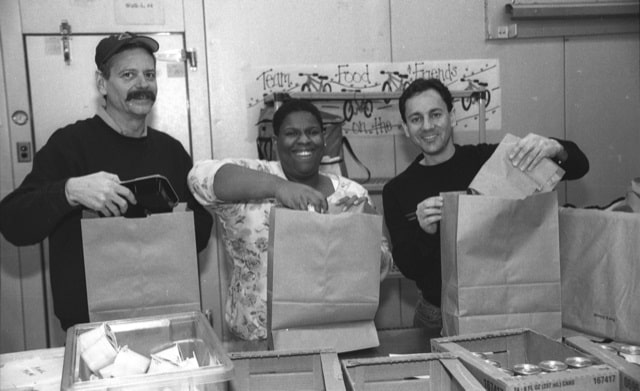 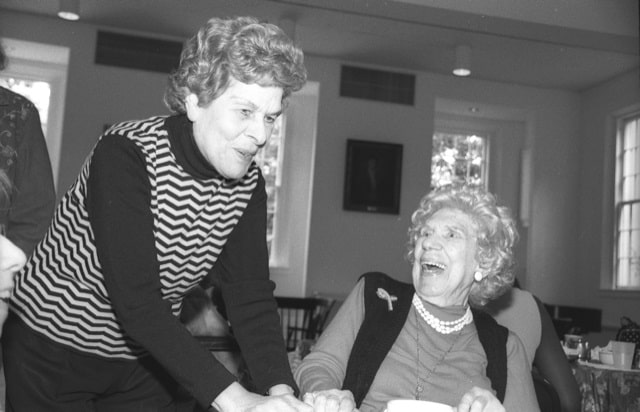 Left to right: As profiled in Visionaries In Our Midst, an Afghan child and her father, both of whom were represented and saved by the Tahirih Justice Center; Robert Egger (on the right) with an employee at DC Central Kitchen; volunteers preparing bags of prepared meals for clients at Food & Friends; two seniors enjoying a laugh at the Georgetown Senior Center.  (Photography by Allison Silberberg)

While the media focuses on the economic peril and politicians focus on turf battles, writer and advocate Silberberg profiles amazing people working in the shadow of our nation’s capitol finding innovating and expansive ways to serve the citizenry and, in particular, the most vulnerable among us. In the colorful and inspiring stories of 18 “visionaries,” Silberberg finds nonprofit Bright Beginnings serving homeless families just a few blocks from the U.S. Capitol, Life Pieces to Masterpieces helping African American youth through artistic expression, the CEO and founder of Mary’s Center for Maternal and Child Care, the founder of the Georgetown Senior Center, the former D.C. police officer who created an after-school family and child support center called the Fishing School, and more. Silberberg, a veteran of nonprofit work, captures the motives and methods of these citizens with compassion, detailing their personal histories and obstacles—child advocacy group founder Aretha Lyles, for instance, was a single mother of three—while testifying to the far-reaching power of a determined individual.

Silberberg takes the “people making a difference” idea and applies it to 18 organizations in the Washington, D.C., area. While she wavers between memoir and journalistic analysis, her intentions are good and the individuals she profiles are inspiring. From helping schoolchildren to providing legal advice, giving seniors a social outlet, and offering low-cost medical care via mobile units, she highlights a wealth of examples of doing good. Silberberg asks organizers exactly how ideas originated and were implemented, and shares annual budgets and staff sizes. She also lists contact information and similar organizations around the country for those seeking to get involved themselves. While this logistical data is welcome and truly useful, it is her moments of awareness during visits to various organizations that make this book so effective. “It’s one thing to understand the Taliban intellectually,” she writes, while researching the Tahirih Justice Center in Falls Church, Virginia, “it’s a whole other thing to see, photograph, and chat with an extended family that would not have survived.” Doing good, Silberberg testifies, truly does save and improve lives.

Judging from recent economic history, charity won’t soon be rendered obsolete. Too many people who’ve made the United States their home suffer from hunger, disease, loneliness, or neglect. Some are lucky enough to cross paths with those striving to make a difference in the lives of the less fortunate. Allison Silberberg has a name for these special people in her book, Visionaries in Our Midst. Silberberg has collected the stories of eighteen charitable groups into a kind of guidebook for people looking to be inspired. We learn about Layli Miller-Muro, who founded the Tahirih Justice Center in 1997 to help “immigrant women and girls who are seeking justice in the United States from gender-based cruelty.” We meet Mary Brown, who co-founded Life Pieces to Masterpieces, which gives young men from unfortunate circumstances the opportunity to experience art and a reason to stay alive in a studio instead of dying on the streets. In addition to focusing on their current work, Silberberg includes the stories of how these visionaries were inspired to make a difference in the world. The book also includes contact information for the organizations profiled in her book as well as other, similar, groups for people who might want to give their own time or money. Silberberg occasionally allows her passion for her subjects to render her writing slightly awkward, but her storytelling style is generally easy and pleasing to read. She doesn’t hide the depth to which these people touch her and often describes her own tearful, joyful reaction to the scenes she witnesses, which adds a rich authenticity to her book. She also has a knack for finding images that embody the sense of need and the corresponding altruism she discovers in people: the sneakers hanging from electrical wires which “represent a life cut short in the streets,” or a line of patients waiting under a tree to see a doctor from a mobile medical service. These are the moments that will resonate with readers. Silberberg herself might be called a visionary; she met most of the groups in her book through the monthly fundraisers she organizes for small nonprofits. She, too, is trying her hardest to make a difference in the lives of people who have so little. She writes, “It’s about touching another’s life, connecting with another human being, being there for them.” As Silberberg reminds us, the ways in which we care for each other may be what makes our nation most great.